Let me preface this post with the comment that I hope this guy has a full and speedy recovery. But c’mon. What was he thinking? 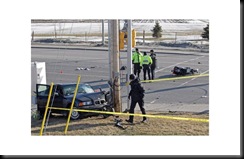 I fully appreciate the need to get back up on two wheels as soon as possible once spring is in the air, but this accident was almost guaranteed to happen:
We don’t yet know who was ‘at fault’, whether ice was a factor, the rising sun blinded one of the drivers, or the 41-year-old rider simply froze (literally) at the controls. But regardless, this accident would not have happened, and two people would not be in the hospital, if he had only applied some common sense and left his scooter in the garage for another week.

We are all fighting the urge to get out there, but let’s do so safely.
(Photo: Wayne Cuddington, The Ottawa Citizen)