The sacroiliac is something that you don’t even know you have until you bugger it up, which I did a few weeks ago while cutting wood for the winter. I thought it had healed, but after the last couple of rides, it’s delivered a not-so-gentle reminder that it’s not yet ready for prime time. Which is another way of saying I’m moving a bit slowly today, and only with the aid of a few extra-strength Tylenols.
As it turned out, not being able to ride or golf (my other summer habit) gave me an opportunity to get into the shop and finish a project that’s been on the go for a couple of weeks.
I’d seen a stylized heron in a garden a while back and thought it would be a nice addition to our own little green patch. But as I’m inclined to do, I looked at it and decided I could make my own version. I already had the metal I needed (leftovers from the local scrap yard from another project), so the cost was nil except my time – which I now had a lot of.
So after a few hours in the garage cutting, welding, and grinding, here it is awaiting placement by the head gardener as soon as she comes home from work. 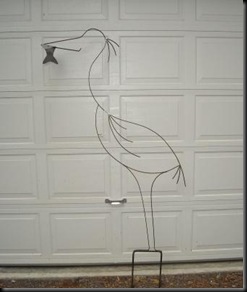