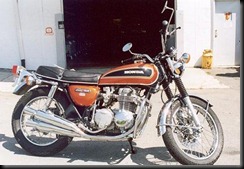 The bike she used for the test was mine, a Honda 550F, which weighed a ton and was nearly impossible to get on the centre stand for anyone slightly less well constructed than Hulk Hogan.  So there was no way Miz Liz, at all of 100 pounds, was going to be able to do it. But knowing the regulations I made sure she could lift it using the same technique detailed in the video, and in fact she made it look just about as easy.
Come test day she goes through the written part and all the riding skills components with flying colours, and then the female tester (all the women we licensed hated the female testers; they were really tough on the ladies) told her to put it on the centre stand. Of course she said she couldn’t, at which point she was told by the tester that she was going on break for 10 minutes and to use that time to “figure it out” . So the missus says to her, “Well while you’re on break, check and you’ll see that all I have to do is show I can lift it. I don’t have to put it on the centre stand.”
When the tester returned 10 minutes later it was to my motorcycle lying on its side in the testing area and my wife sitting on the side of the seat. She then lifted the bike as if it weighed nothing and left it on the side stand to the obvious enjoyment of all the male license candidates who had been watching the interchange with some amusement.
The tester didn’t say a single word, just signed the form with a pass mark and handed it over. I guess she must have checked.