My friend Bob is one of those guys that we all know. He bumbles his way through life in a state of blissful ignorance. Floating along like a cork on the current, just going with the flow, he somehow always avoids being dashed up on the rocky shoreline. A good friend but infuriatingly blasé about life and stuff in general.

Well Bob saw the movie “Bucket List” a while back (a very good flick by the way) and decided that life really was too short and so he needed his own bucket list to make sure he accomplished all of his goals before it was too late. The fact that he probably has 40 good years still in front of him never seemed to enter his mind.

Along with the expected bucket list entries like skydiving, bungee jumping, visiting a nude beach, and winning the lottery (well that’s on everyone’s list) Bob’s list included buying a motorcycle and learning how to ride.  Of course that precipitated a whole series of conversations about what type, and how big, and new or used, and so on – the kinds of things you’d expect from a newbie. Meantime he’s looking around on the used market -- eBay, Craig’s List, Kijiji -- for whatever he can find that’s a) running; and b) cheap because he knew there was no way he’d be able to afford everything on his list, unless the lottery win came through.

On Thursday I got the call.

“I found the bike it’s an old Royal Enfield but it’s been completely restored and a good runner this guy’s wife is selling it her husband just died and she’s getting rid of his stuff.” Bob’s so excited this comes out like a stream of consciousness, punctuation optional.

“I think so it’s well within my budget and she even agreed to throw in his GPS since he won’t be needing it any more.” And he laughs. Then adds, “I’m going to look at it tomorrow and probably buy it.”

So I told him a few things to check carefully and wished him good luck before hanging up.

Today he came by with his new bike, GPS included. 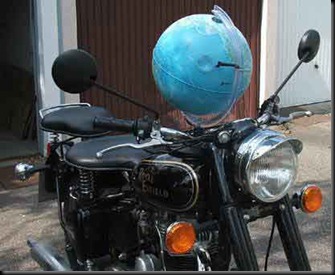