Sunday was one of those perfect days that comes along every so often. It started with an early round of golf. Conditions were excellent – sunny, cool’ish temperatures, and no wind – and I scored well, dropping the handicap another few notches. By 1:00 I was home looking for something do do in the afternoon.
Now to be clear I had lots to do. The honey-do list is as long as my arm and then some, but it was too nice a day to waste doing chores. I needed something frivolous.
A road trip was the perfect answer. Monday the spousal unit and I were scheduled to play a new course and I wasn’t too sure just where it was, so it seemed a recce was in order to get the lay of the land.  Besides I was still trying to get some road time to play with my GoPro camera – a handy little device that has so far managed to avoid being controlled by me in any meaningful (i.e. useful) way. (I plan to do a review as soon as I figure out how to use it. The user interface designer must have been on drugs.)
Although the village of Dwyer Hill had long been subsumed by the ever-expanding city boundaries, the Dwyer Hill Road still exists and cuts through farming country to the south-west of Ottawa. A two-lane road, it’s often the quickest way to get to where you’re going (in this case North Grenville), while avoiding the superslab and city traffic. And it’s much more scenic.
After hanging a left at Burritt’s Rapids and following the Rideau Canal for a few miles (even more scenic), I found my destination, exactly 100 kilometers (60 miles) from home. Mission accomplished.
But it was still early and the sun was still shining so I thought I’d pay the missus a visit at work in the city. She works in one of those large booksellers (like Barnes and Noble) and my stack of unread books had dropped below the 1-foot level so it needed replenishing. Besides there’s a Starbuck’s in the store and I had a craving for a iced latte.
After a quick detour into the city to satisfy mind and body it was time to head home – the long way – with a stop at Scoop’s in Pakenham for a pralines and cream ice cream, a swing through Arnprior to talk to my favourite computer store guy (who was planning to take a Bombardier Spyder down to Montreal on the weekend – must check with him to see how that went), and then a meandering swing through the village of White Lake (population: a handful).
All told it was about 250 kilometres (150 miles) of riding under perfect conditions. And except for the fact that my GoPro was still winning the battle of wits (which is why there are no accompanying pictures or videos), a great day. 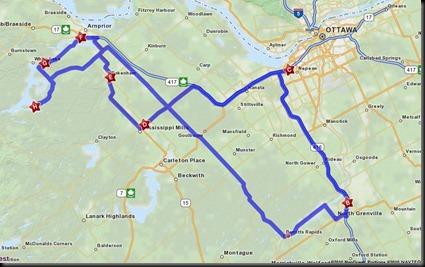