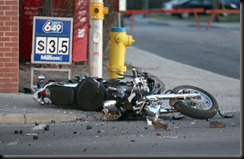 Davis got off far too lightly in my opinion. His year in jail will, in all likelihood, be significantly reduced for “good behaviour” and/or early parole. And with a history of driving without a license and without insurance it’s far from certain that the driving ban will have any affect whatsoever. It’s a sad day for justice indeed.
To read more: http://www.ottawacitizen.com/news/Victim+family+cheers+driver+fled+scene+after+killing+motorcylist+away+jail/3657925/story.html