Is yellow the new black?

There’s an old adage that says you can never go wrong with a black motorcycle. I suppose it may be because it’s a “tough” colour, intended to strike fear in the hearts of “citizens” everywhere. But it’s more likely because colour is such a personal choice and black motorcycles were the two-wheeled equivalent of beige walls in new homes and apartments – in other words, easier to sell.
I expect that was once true, but is it still?
As I look back over the various rides I’ve had over the years I have to say that black was the dominant colour. I did, and do, own bikes of other colours but when the tank got damaged on my originally gold-coloured CB350, I painted the bike black. My RD350LC was black, as was every one of the several Nortons I owned. The Z-1 was due for a paint job (which would have been black) when I sold it, and my current ride, the Dyna, is also black.  So you could say I’m pretty comfortable with the colour. (I know, purists will insist black isn’t really a colour, but if it’s good enough for H-D to decorate their bikes with I’m happy to call it a colour. But I digress.)
So why is it then that I’ve now become so attracted to yellow motorcycles?
The first yellow bike that really caught my eye was this one, at a dealership in Kitchener. Not pure yellow, it had a green metalflake undercoat and an amazing depth to the paint. The reflected sunlight dazzled as it literally jumped off this yellow Dyna.  In fact it was this bike that first got me thinking about owning a yellow machine. 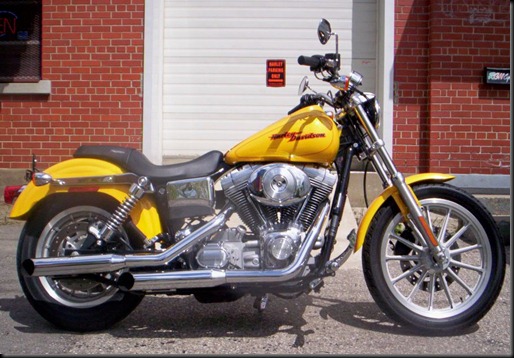 Then the 2011 H-D models came out, and right there on their web site Harley-Davidson had this gorgeous Fat Boy on display. No wallflower, the Chrome Yellow colour brings the bike to life, demanding passers-by to “look at me!”. And then this Norton Commando shows up in my in-box, combining what is arguably my most desirable motorcycle with a colour that is quickly becoming a favourite of mine. 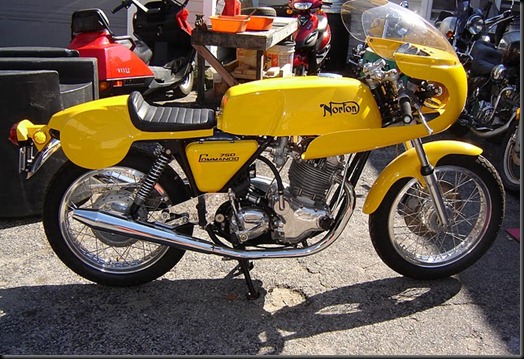 Is it all a sign? Is someone trying to tell me something? Could I really live with yellow?