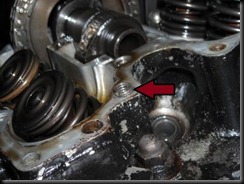 Of 11 bolts that hold the rocker cover in place, 9 had been stripped. Of those 7 had previously been heli-coiled, of which 5 of the heli-coils had also been stripped. So basically, if I had been able to do so, I could have turned the bike upside down and given it a good shake to have the rocker cover simply fall off. Now I knew why the previous owner (the so-called motorcycle mechanic!) had been reluctant to fix the oil leak – although, to his credit, he did advise me of it during the negotiations. So I guess it’s really my fault for not digging further into it at the time. (Another lesson learned, belatedly.)
So I was faced with drilling and re-tapping all those bolt holes 2 sizes over, which is not only a pain in the ass to do, but in a couple of cases would end up making the walls really thin. But then I remembered that the bike came with most of a spare engine, which was spending the winter out behind the shed, covered in snow. I went and dug it out and dragged it into the shop to thaw. And to my great delight, when I removed the rocker cover, the head had not been similarly butchered. So a quick swap of the cam and a couple of other bits and I now had a good head to work with. From there it was easy to bolt it all back together and fire it up. Now it runs great in the garage and I’m just waiting for the roads to clear for a final road test. I’m pretty sure I didn’t see any leaking oil (although the exhaust fumes were thick as a London fog when I was running it up to temperature inside the garage) so I’m hoping it’s good. But for now it’s done, and I can get on to the next project.