A few weeks ago Lady R posted about test riding a Fat Boy (of which she is now the proud owner – hooray for her!) and her newly discovered joy of riding without a windscreen. That post got me thinking about my own choices in that regard.
Unlike Lady R who had always ridden with a windshield, I had never ridden with one until I bought the Dyna. None of my bikes had a windscreen (you can’t really count the 1/2 race fairing on the RD350LC) and so I was quite used to hanging on for dear life at 80 or 90 and dodging June bugs as they headed straight for the tip of my nose or those big juicy grasshoppers that leave a bright yellow smear across your glasses, forehead, and helmet.
But since the Dyna did have a windshield I decided to try it out. It took a while but eventually I found a position that resulted in maximum wind shielding and minimum helmet buffeting. And I got hooked – or probably more accurately, lazy. Even though it was a quick-detach model, it just became easier to leave it on all the time, and so I did.
Then I read Lady R’s post and decided to ride naked for a change. (Clarification:  without windshield, not without clothing. I may not be ATGATT but I draw the line at exposing certain bodily parts to sunburn, flying and biting insects, and the possibility of road rash – not to say arrest.) One trip and I realized what I had been missing.
So now the default position is off. Certainly if there’s rain  or cold temperatures in the forecast, or a long’ish trip is in the works I’ll opt for the windshield – it’s much more comfortable and far less tiring than being out in the wind at speed – but for quick trips into town or over to the golf course the windshield stays in the garage. But my riding glasses need cleaning more often. 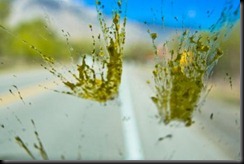