Gary France, who many of you know from his blog Flies in Your Teeth, has posted a picture of his favourite “worst road” along with a challenge. Well compared to my favourite worst road his looks like a dual carriageway with a central reservation (for Gary’s benefit).
The California Road runs from the southwest corner of White Lake to what was a small subsistence farming community called California, Ontario (not to be confused with Ontario, California). As optimistic as the original settlers must have been to name their newfound paradise California, I imagine that enthusiasm was quickly beaten out of them by harsh winters, bad soil, and a rocky, hilly geography leading to little more than a lot of blood, sweat and hungry times. And that’s not to mention the mosquitos and black flies that have been known to drive people insane in these woods. Nothing is left of the original settlement except for one or two old log cabins now used as hunt camps and the plots of land once wrested from the Canadian Shield through back-breaking labour have long since reverted to natural forest. Even today very little of this general area known as Lanark Highlands is farmed.
But the road stayed, eventually being extended at both ends to create a more direct route, a shortcut if you will, between the White Lake area and the local seat of government in Lanark.  And it is maintained by the township, sort of.
The seven or eight kilometres comprising the original California Road will take 25 or 30 minutes to drive, and that’s if the road hasn’t been washed out, closed by fallen trees, or covered in 2 feet or more of fresh snow.
So without further prattling on my part here are a few snapshots of the California Road, first in the autumn and then in spring time. 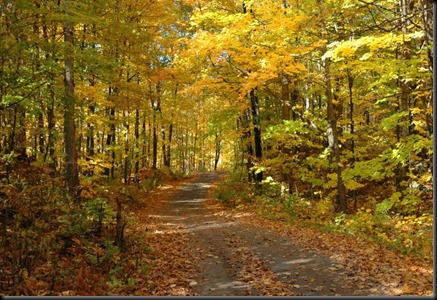 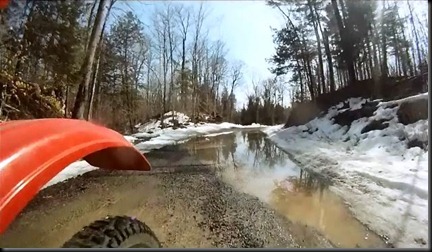 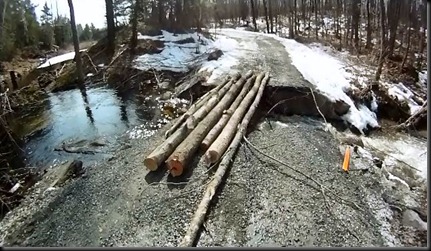