For want of a little charge. 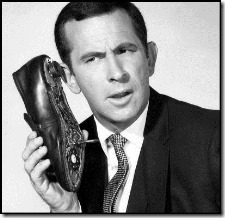 Phone manufacturers have come up with these marvelous new ‘smart’ devices that do everything from checking your email while on the road (like anything is EVER that important), to allow you to listen to tunes or the radio, or sometimes even actually phone someone and talk person to person. But the one thing they haven’t been able to do is create a battery that will last a full day of texting, chatting, emailing, picture taking, and GPS’ing. And a cell phone with a dead battery is just excess baggage.

Ditto for cameras. Whether it’s your new GoPro or your older point-and-shoot, it’s no good without power and, if you’re like me, that’s the state my cameras are usually in when I want to take that once-in-a-lifetime shot – dead battery, AGAIN!
So it was with some interest that I listened to Bobscoot (Wet Coast Scootin) as he showed me how he stays powered up and connected even after several weeks on the road. Then, on my way home from meeting him in Perth (post here), I stopped at the Canadian Tire in Smith’s Falls and picked up the few bits I’d need to give myself similar self-sufficiency, even when only out on a day trip.
The key to the whole thing is that I use a battery tender and have the plug permanently connected to my battery and easily accessible. It’s a standard two-pronged plug which gives me 12 volts – more than enough to keep everything I own fully charged.
The other key factor is that virtually all portable devices now from tablets to cameras have a USB connector for data transfer and charging.
So here are the parts I started with: 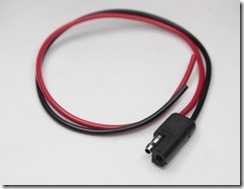 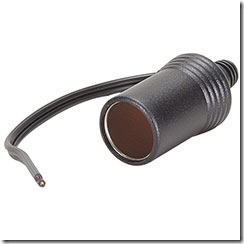 the ground terminal from the battery was connected to the inside walls of the socket. The ground should be the exposed pin on the battery tender connector if it was installed correctly. If not, fix that first. You can also buy these connectors ready made (see photo) but I was in a hurry, besides I wanted a specific length of cable to reach into my saddlebag from the battery tender pins.
Slide in your USB plug and you now have a 12 volt USB power source. Note that some of the cigarette lighter sockets can be quite deep and sometimes (as in my case) the USB plug wouldn’t actually reach the pin at the bottom and so couldn’t make the connection. A few minutes with a hacksaw to trim 1/8” off the top of the socket fixed that problem. 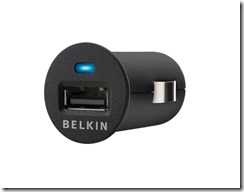 USB plug for cigarette lighter
So far so good. You can now try your various connector cables with your phone, tablet, or camera to test the system. In most cases it will work fine, but in some, not so much.
Apparently there are some devices out there, notably Android based, that are just a bit too smart. These devices send a signal of some sort to the power source to see if it is suitable or not, and if not they simply won’t charge with a standard data cable. It turns out I have 2 of those devices. There are charging-only cables available but they can be hard to find and it’s quite easy to modify one of the countless cables you probably already have lying about. 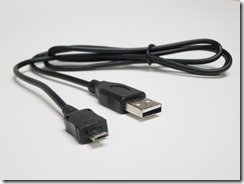 extra USB-micro connecting cable
Every USB connecting cable has 4 wires: red and black for power and white and green for data. All you need to do is short out the data cables by connecting them together at the device end of the cable (not the USB end). To do this carefully cut open the plastic coating to expose the wires inside. Cut the white and green wires. Strip 1/8” or so off the device end wires and twist the wires together. (Solder is better if you have a soldering iron, but twisting will work.) Then wrap the join with plastic electrician’s tape, wrap the cut ends from the USB side to prevent shorting, and wrap the whole thing with electrical tape. You now have a charging-only cable that will work with everything.
So for about $15 in bits and pieces and a few minutes work I now no longer have to worry about a dead battery in my cell phone or camera. If it’s getting low I simply plug it in, toss the whole thing into my saddlebag and let it charge while I ride. Thanks Bob!