It was a cool and blustery morning when I left to meet up with Bob (Bobskoot: Wet Coast Skootin) and Karen (Motorcycle Touring – Riding on my V Star) in Perth. At 14 degrees with dark grey clouds scudding across the sky there was a distinct autumn-y feel to the day. The weather guessers weren’t calling for rain but with their recent batting average being .019 I wasn’t going to take any chances and packed my rain gear just in case. And I dressed in layers in anticipation (hope) that the day would warm up eventually and I’d be able to strip one or two off. 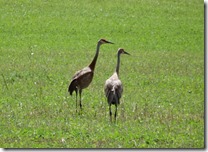 The ride over through Almonte (the home of James Naismith, the inventor of basketball) and Carleton Place (nothing ever happened here) was uneventful, although I did see a couple of sandhill cranes in a field and so had to stop to take a picture or two.

It took a little more than an hour to reach our proposed meeting point in Perth and I was still a bit early so I drove around town for a while until I saw Karen had arrived. And Bob? Well Bob was lost in Perth. I had seen someone on a luggage-laden bike on a side street a few blocks away and, assuming it was Bob, went out in search of him. Success. With Bob in tow I headed back to the meeting place and we made our introductions, which almost seemed redundant since we’d been following and commenting on each others’ blogs for months. However, formalities must be observed. 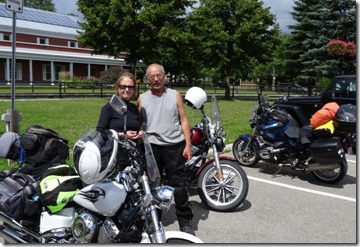 And then it was down to business, which meant lunch. As a major tourist destination there is no shortage of good eating places in Perth. We were parked right beside the Tay River across from a nice Mexican food place with a waterfront patio so the choice was an easy one. 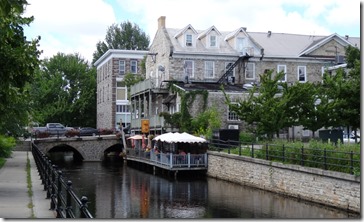 We weren’t even out of town before the rain hit again. My rain gear was still packed away but I could see blue skies ahead so I pressed on. Soon enough I was soaking wet (Bob and Karen, both smarter than me and suitably attired, stayed dry) but once the rain stopped and the sun came out I dried pretty quickly.

In Westport we stopped for a coffee. We chatted some more and Bob demonstrated the very impressive collection of wires, cables, adapters, various electronic devices and miscellaneous gadgetry needed to keep a dedicated moto-blogger plugged in and fully charged while on the road – all of which was useful information for my upcoming September trip.

Then all too soon it was time to move on. Bob and Karen saddled up and rode south to Kingston while I headed back north. I had 2 more rinse/dry cycles by the time I got to Carleton Place but then the rains finally stopped, the skies cleared, and except for riding into a very strong north-westerly wind the rest of the trip was quite a nice ride.

All in all a great day, a good 230-km ride, and a couple more electronic friends met in the flesh. 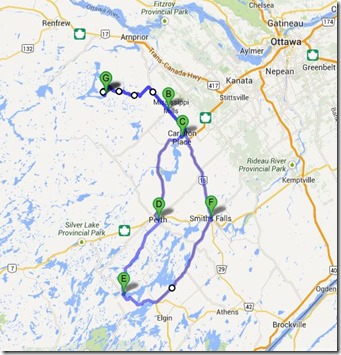