In honour of the Port Dover Friday the 13th celebrations which we were missing we all wore Friday the 13th tee shirts. Well most of us did; one person who shall remain nameless didn’t have one, an oversight to be corrected next summer.

Leaving Kayenta heading north on Hwy 163 we passed Monument Valley again. It was remarkable how different the rock formations looked in morning sun versus the late afternoon sun of the previous day. It’s easy to understand how serious photographers can spend days waiting for just the right light conditions because the subject changes so dramatically. 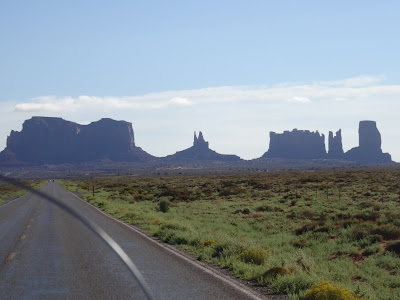 We then swung over on Hwy 160 to see the Four Corners Monument which commemorates the only place in the US where 4 states – Utah, Arizona, New Mexico and Colorado – all meet at one point. I expected something significant, but all it consists of is a concrete marker surrounded by the 4 state and Indian flags and numerous native artisans trying to sell their craftworks. And this after paying a $3/head admission fee and having to navigate a muddy gravel parking lot. Having seen how well the authorities had done up other points of interest I was quite disappointed in this site. Nonetheless we took the requisite photos and headed out.
North again on highways 491 and 191 towards Moab we stopped to spend a few minutes at Wilson Arch which was worth the stop for sure as it’s quite beautiful. 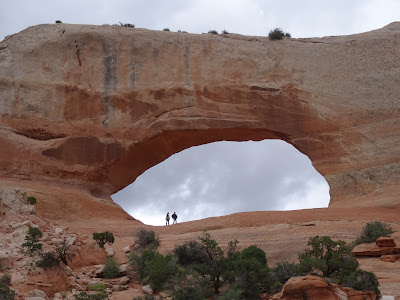 Just as we were about to leave the arch the rain started again and chased us all the way into Moab. But the real heavy downpour, including 4” hailstones, kindly waited until we were checked into our hotel, which, conveniently enough, was located right across the street from the Moab Brewery and Restaurant. Of course we went there for dinner. 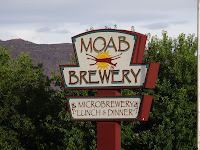 The beer was excellent, the food was good, but the helping sizes were huge. In spite of our best efforts there were still some steak pieces and sausages left on our plates when we were done.  The waiter asked if we wanted carry-out. When we explained that we were in transit he then asked if we’d mind if he took them for a snack at “the big game” tomorrow.  That was a first for all of us but we said sure. We hope he enjoyed his leftovers.

Over dinner we reminisced about the day a couple of common observations arose. The most common was the wild variations we’d seen in the landscape that day. There was everything from the reds of Monument Valley to the really deep reds around Mexican Hat, the brown and gray rocky outcroppings to the lush fields around Cortez that could have been southern Alberta. And sometimes just one side of the road to the other would be totally different. It seemed every few miles brought something different to light,
Afterwards we went for a walk down the main street of Moab. It seems to be a very artistic/outdoorsy place and we discovered a great art gallery. This is where being on a motorcycle can pay for itself as there’s no room to bring “just the perfect thing for the garden” home. And I was careful to not point out the “We ship anywhere” signs.
The rain started again as we headed back to the hotel and the electrical storm and light show continued most of the night. It’ll be another wet seat on the Harley tomorrow.