The Great Circle Tour – A Retrospective

It started – and ended 8 days later – in Las Vegas. 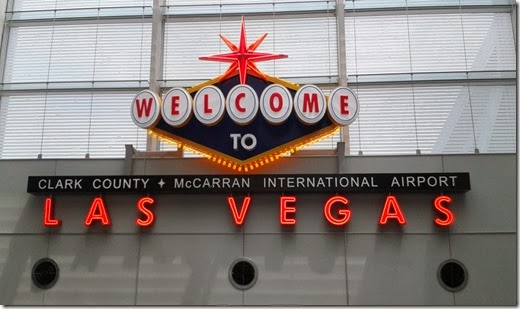 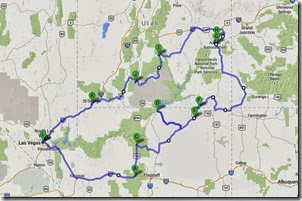 First, by the numbers:

Now that we’re back home and getting over the jet lag and red-eye experience it’s time to look back on our trip and start the daunting task of wading through thousands of photos and dozens of video clips to try and reconstruct the highlights (of which there were many) of the past few days. But first I want to acknowledge the folks who made this possible for us – the people at EagleRider Motorcycles. F 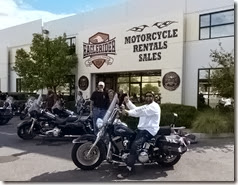 rom the get-go they were helpful and accommodating to make sure we got the trip we wanted. The local staff in Las Vegas were efficient and friendly and the bikes were well-prepared and in good condition. The arranged accommodations were all easily accessible and well suited for biker travel. I can’t attest to EagleRider’s problem-handling capabilities as we didn’t have any issues but I would certainly use them again, they were great.

The weather. What is a motorcycle trip without weather? Being exposed to the elements is one of the factors that makes motorcycle touring what it is. That the elements may turn nasty on occasion comes with the territory. All week we were on the edge of those storms pounding parts of Colorado so we had more rain that we would have liked. But that was more from a road safety perspective than anything. Neither of us were that familiar with our bikes, especially under fully loaded 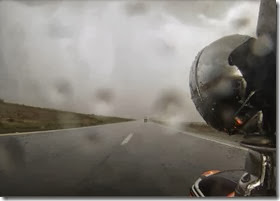 and wet conditions, and that was a concern at times when the weather got really heavy. But for the most part it was a minor irritant and actually lent some character to a lot of the places we visited. And the fact that there was a lot of cloud kept the desert temperatures to a reasonable level and reduced the risk of sunburn and/or heat stroke, so it wasn’t really that bad overall.

The geography. This entire area is simply mind-boggling. Never exposed to the grinding, crushing motion of the great glaciers this part of America was sculpted by different means and the results are at times surreal and always incredible. Every day brought something new and different and it was a thrill just to ride through it all. I certainly can’t do it justice with mere words and 2-dimensional photos so if you’ve never been to this area make plans to go now! You won’t be disappointed. But if you can, arrange to do so outside school holidays. The crowds were small most places but the ubiquitous rental RVs where everywhere and I can only imagine how painful it would be riding behind a row of 10 of those monsters being driven at 15 miles per hour under the limit through some of the canyon roads which we enjoyed in relative peace. 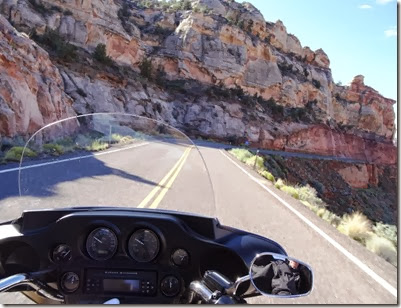 The bikes. As I noted before we had rented Electra Glides for this trip. While we both took some time to get comfortable with them (me more than my brother because he already rides a Road King) they turned out to be the perfect choice. At 75-80 mph on the highway they were as comfortable as sitting in your La-Z-Boy watching the world pass by on a big-screen TV. They just ate up the miles in total comfort for both rider and passenger and will be my bike of choice should I ever undertake such a trip again. In 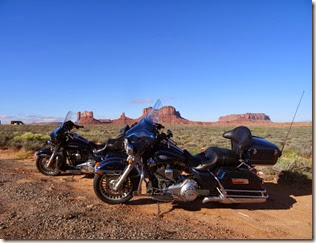 the city however, it’s a different beast entirely. Heavy and not very manoeuvrable (partly due to my lack of experience and fear of dropping “someone else’s” bike) it would be like owning a Humvee just to do the grocery shopping. Both low-mileage 2012’s the bikes were in good condition and created no drama – just the way we like it.

The accommodations. The hotels we stayed in were all middle-of-the road, Holiday Inn Expresses and their equivalents, basically the same quality of hotel we normally stay in when travelling on our own dime. As noted earlier they were all easily accessible from the route we were on so no driving around strange cities and towns looking for the hotel. With only one 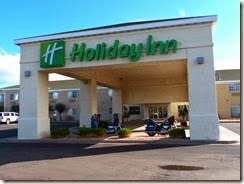 exception all had breakfast included, one even allowing me to fulfill my annual craving for Froot Loops! Most were also located within easy walking distance of restaurants providing a choice for dinner and/or a local pub for a pint after a hot (or wet) day on the road. And best of all, all were very biker friendly with a couple even letting us store our bikes out of the rain under the front canopy. EagleRider chose their hotel partners well.

But too soon, the end. We’d had such a fantastic time we were all sad to see it end suggesting, only partly in jest, that we should see if the bikes would be available for another week. Perhaps there wouldn't be quite as much rain …