I’m sorry, but I really am really sorry. 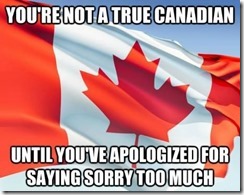 One of the Canadian stereotypes is that we apologize too much. I don’t know if the stereotype is accurate or not, although I did once apologize to a door frame after I walked into it.

True or not, saying “sorry” is mostly harmless; an interjection used the way some would say “uh-huh” or “sure”. That is until politicians start to throw the word around. Then it takes on a totally different significance.

This week Ontario’s premier, Kathleen Wynne, felt it necessary to offer an apology on behalf of the Ontario government for legislation passed back in 1912. Yes, 1912 - 104 years ago. (http://news.nationalpost.com/toronto/kathleen-wynne-to-issue-formal-apology-for-ontario-governments-1912-ban-on-speaking-french-in-schools) Interestingly the provincial government of the day wasn’t even the Liberal Party (currently represented by Wynne) but the old Conservative Party under Sir James Whitney.

This is not the first time Canadian governments have apologized lately. In 2006 the Harper Conservatives apologized to Chinese Canadians on behalf of “the people and government of Canada” for a head tax that was applied to Chinese migrants from 1885 to 1923. In 2008 the same government apologized for the 1914 Komagata Maru incident where  a number of Sikh would-be immigrants were rejected by Canada and the ship forced to return to India.

The common denominator in all these occurrences (and there are many others) is that the apology is generally offered on behalf of people who were not responsible to people who were not affected. And they often include some form of compensation paid for by taxpayers who weren’t even born at the time of an event which ethics are now being evaluated against a 21st century standard. Sadly, with no statute of limitations on apologies, these crop up frequently as various grudge-bearing special interest groups lobby any politician seeking electoral support.

But let me ask you this: When was the last time you heard a sitting politician stand up in public and apologize on behalf of themselves and their government for their own bad policies, ill-considered laws, illegal wars, lapses in fiduciary responsibility, or even borderline taxpayer fraud? Never. Until they do the issuance of these pro-forma, belated apologies for events that took place long, long ago in a far, far different world will continue to be meaningless vote-getting gestures earning yet more so-what shrugs.