At this time of year I procrastinate when it comes to putting the bikes away, hoping against hope for that one last, glorious, sunny day when I can go for a short, even if it’s chilly, ride. Usually it works out, but not this year. Riding season is done.

And that explains why the Harley was sitting, idling, on the snow-covered driveway yesterday, warming up the oil in advance of its pre-winter oil change. Which is a messy affair at the best of times, not helped by melting snow off tires and boots mixing with the inevitable oil spills that somehow manage to always get past the drain pan. 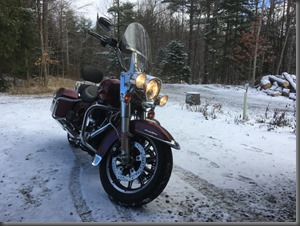 But now it’s done and she’s ready for a long winter’s nap. I’d also like to think I’ll be smarter next year, but I know I won’t.