One thing leads to another.

There’s probably a famous quote by some renowned philosopher on the subject of how one small action can have a ripple effect far beyond expectations. I think I once read something about the unintended consequences of a butterfly flapping its wings in Tokyo – or maybe that was Godzilla.  But, whatever, I couldn’t find it so you’re stuck with “One thing leads to another”. Just imagine someone famous said it. Or something like it.

As my loyal followers know, a little over a year ago I acquired, for the princely sum of a bottle of great Canadian whisky (Crown Royal’s Northern Harvest – if you haven’t tried it, treat yourself. You’ll be happy you did.) a 1981 Kawasaki 440LTD. It had issues but since then I have sorted out the carburation problems and got it running, fixed the safety items like tires and fork seals, and it is now licensed and on the road. However there are still a few things I want to do to it cosmetically, including fixing the tank.

There’s really nothing wrong with the tank except for a largish dent in the side and a few deep scratches in the paint. My plan was to repair it myself and paint it over the winter (kind of partial to Jade Green), drawing heavily on the expertise of a friend who’s past life includes years as an autobody technician and who passes his spare time these days hand sanding his 1969 Barracuda Notchback in preparation for a trip to the paint shop some day soon. I think he’s down to 1200 grit wet by now.

Be that as it may, being the consummate professional I wanted to make sure I had a Plan B in place for when I screwed up the tank beyond salvage. So I started looking for a good used tank in all the usual places – eBay, Kijiji, Craig’s List. In the process I discovered there are lots of used tanks out there that already look like the anticipated outcome of my Plan A (in which case I could do that myself) and those that didn’t were outrageously expensive.

Then I discovered, quite by accident, a fellow who had 2 – count ‘em – 2 good used tanks for sale at a very reasonable price and he was only a couple of hours’ drive away. And, best of all, the tanks came with the rest of the motorcycles still attached!

So it was that yesterday found me on a 500-kilometre road trip to check them out. The bikes (and tanks) were as specified and generally in very good condition for being 35-plus years old. One is an ‘82 and the other is an ‘83 but most of the parts for those years are interchangeable so I would have many, many options that would result in two, if not three, serviceable motorcycles at the end of the day. And so, after a bit of negotiation and the requisite transfer of funds, they were duly loaded up and I was on my way home, having just tripled the size of my Kawasaki fleet. 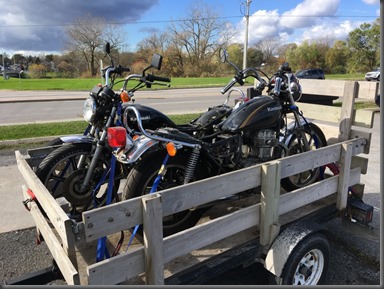 But now the garage is full so I really must stop checking out used bike sales for a while. 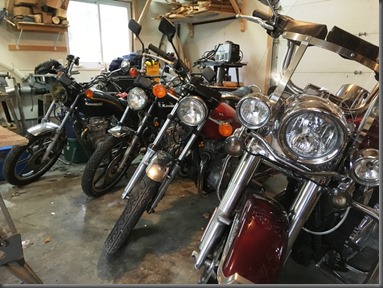