Every so often I get offered some piece of equipment ‘for free’. Motorcycles, lawn mowers, snow blowers have all come my way like this. Sometimes it’s because the previous owner didn’t want it any more – works fine, just of no use. Other times the previous owner is so fed up with trying to get it running the alternative was the village dump. It’s the latter that I seem to be a particular sucker for.

The last time it was 10-HP snow blower of unknown vintage. The PO said it “ran a bit rough” when it was last put away “at least 5 years ago”, but he couldn’t get it running again. So, the sucker for punishment that I am, I offered to take it off his hands. 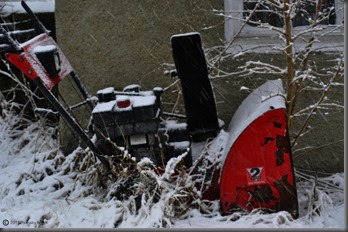 A new friction disk, new fuel lines, a new spark plug, and a carb cleaning later I had it running – sort of. Nearly impossible to start it would then surge, fart, and stutter on occasion. Other times it would just blow flames out the burnt-out muffler and quit. But it was ‘free’ so I was prepared to put up with its generally obstreperous attitude. Besides, I had another, somewhat better working, blower in reserve for when it was being particularly aggravating and bad-tempered.

Then things changed. The daughter and her partner just purchased a house and could use a snow blower. I really didn’t need two, and they really didn’t need anything as cantankerous as Big Red. But the price was right and so back into the shop he went. This time I went all out.  A friend supplied a used muffler in return for a couple of my special butter tarts and I put a $25 carb kit in it. Now it runs better than my old standby blower.

It must have been the butter tarts.