Those of us who ride know that a sure remedy for all the bullshit that surrounds us is to go for a nice, long ride. No matter what, two-wheel therapy will have all that nonsense flowing off your shoulders like water off a duck’s back; it’s just you, your bike, and the open road.

Right now, as 2018 shamefully slithers into 2019,  the bullshit is at epic levels. We have elected incompetents, fools, and criminals – sometimes all three – to positions of leadership who head up xenophobic, populist governments, or spend their time virtue signaling and berating China (and others) for not having enough female CEOs. Climate changes are coming fast and furious with damaging storms becoming the norm and what were previously considered to be 100-year events occurring as frequently as annually. The worlds’ major stock markets are in freefall (see leaders, above) taking untold billions out of our pension funds and personal investment portfolios. But the ultra rich continue to amass obscene fortunes (see leaders, above). It seems the only news that isn’t fake news is news about fake news, which is now being employed to destabilize democratic governments and long-standing institutions world-wide, with the tacit approval of some of those same leaders.

And, as depressing as all that is, it’s only going to get worse for the foreseeable future until the pendulum swings back to a saner, more rational world order and the damage begins to be undone.

Meanwhile, the majority of us are buckled in and simply along for the ride.

So screw it, let’s ride. Right?

Ice-covered roads and sub-zero temperatures put paid to that notion for the next few months so I’ll have to find another distraction. Drugs and/or alcohol are tempting, but then I might just start thinking those incompetents, fools, and criminals aren’t so bad after all. No, it will have to be something less self-destructive. So I guess it’s time to get the next 440LTD out of the shed and under the knife/wrench. 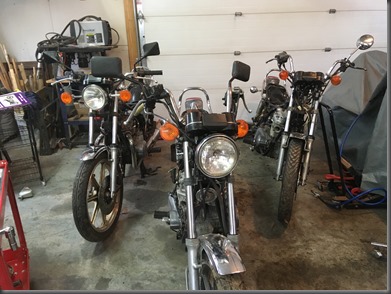 If I can’t spend it on a beach or golf course somewhere, what better way is there to start a new year than dismantling something.