Okay kids, gather around the woodstove and let this old man tell you how life used to be. Once upon a time, when we actually wrote letters to each other, we sometimes used typewriters. They looked like this: 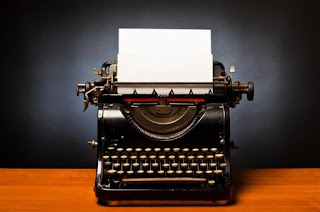 To transfer the desired letters to the page the typewriter used a ribbon, a carbon-embedded strip of cloth. Hitting the cloth with the appropriate key transferred a wee bit of the carbon to the paper, leaving an imprint of the letter. Of course, over time, all the carbon in the ribbon was used up and the ribbon was then replaced with a new one in the same old typewriter. The ribbons were generic, and very inexpensive compared to the cost of the typewriter. They were considered ‘consumables’.

Now when we want a written document we print it from a computer using either an inkjet or laser printer. Similar to the ribbons of the past, the ink (or toner) gets used up over time and must be replaced. Except now there’s a twist. Thanks to the Chinese a printer can now be had for less than the cost of a decent meal in a good restaurant, while you have to sell your first-born to pay for replacement ink cartridges. (Sorry kiddo, I should have prefaced that with a trigger warning.)

So now, based on comparative values alone, the printer itself has become the ‘consumable’. Cheaply made, it might have a 12-month lifespan before some tiny, critical, molded plastic piece snaps off, rendering the entire device useless. And forget using the expensive, left-over ink in the replacement machine. Manufacturers have figured that one out too, releasing new, non-generic cartridge designs with every model thus ensuring no savings can accrue to the the frugal consumer. In fact, as most printers come with a partial ink load included, there’s even an economic argument that can sometimes be made for simply tossing and replacing the entire printer when the ink runs out. Environment be damned.

And so it was that I recently cleaned out the office cupboard and headed to the recycling depot with this load. 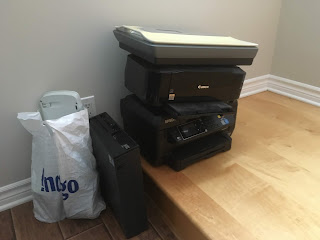