My favourite news aggregator had these two items posted together this morning. One wonders what would happen if both were to occur. 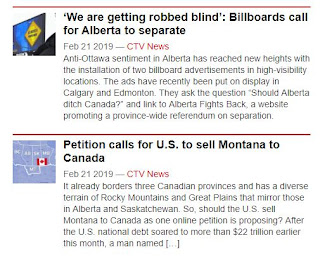 Canada’s redneck province, Alberta, has decided that it’s not getting a fair shake from the Rest of Canada (ROC) leading some to call for separation. This is mainly because, for a variety of legitimate and not so legitimate reasons, initiatives to build more pipeline capacity to move crude oil out of Alberta to tidewater and/or the US have been stalled for years. There is some validity to this argument although there is also the point to be made that the oilcos have significantly increased production without the necessary delivery infrastructure in place, leading to over production and the inevitable downward price pressures that creates. Add to that the fact that successive provincial governments have been fiscally irresponsible, borderline criminal, by not making provisions for the typical boom-bust cycles of resource development and you have a population that feels hard done by, looking over the fence to our southern neighbour as being a more reasonable dance partner than the ROC.

The Montana petition is a slightly different proposition as the proposal is to sell the state to Canada for $1 trillion to help reduce the US national debt. The proposal has attracted interest from residents of the state for a variety of reasons: “Kristen Inbody, a columnist for the Great Falls Tribune in Montana, told CTV Regina she has spoken to a number of residents who listed legal marijuana, healthcare, better tea, and Tim Hortons as potential draws in Canada”.  All worthy objectives to be sure.

While neither proposal has a hope in hell of becoming reality – Alberta separation is the wet dream of a loud-mouthed minority and selling Montana is a joke – I can’t help but think of a scenario where both occur and a separate Alberta finds itself totally surrounded by Canada, with no access to anywhere, while the ROC simply bypasses the country-previously-known-as-Alberta by swinging a few miles to the south. One almost wishes it could happen.

Besides, Montana Canada has a nice ring to it.