Last of a dying breed?

In a comment to a recent post where I described an early experience with motorcycle repair, Gary France made the followng observation: “It makes you wonder where children today will get those same sorts of skills, but more and more they cannot even begin to repair things, so are faced with a life of throwing things away when broken.”
This got me thinking. For many years I did all the work on my own vehicles – engine rebuilds, transmission repairs, brakes, etc. I did it all, often with little more than a basic tool kit working in an apartment parking garage. (Some of the neighbours were less than impressed, but doing regular maintenance on the building superintendent’s car made that issue go away.) But now when I have a problem and look under the hood 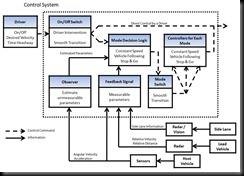 of my 2011 vehicle I realise the best thing to do is take it to the dealer. With the reliability of modern engines and components, the most likely culprit is one of the dozens of ‘black boxes’ and there’s no way any backyard mechanic can afford the $100,000+ worth of specialised electronic gear to test, upload, and re-calibrate any of those computers. And if a firmware fix doesn’t solve the problem, into the scrap bin it goes, to be replaced with a brand new part sourced from China or Mexico.
This means the role of the mechanic is changing. The old style “fixer” is being replaced by the “diagnostician”, the stethoscope by the computer, and years of experience by a parts book and a telephone (or, more commonly, a direct computer link to the parts supplier).
That isn’t necessarily a bad thing as, thanks to the all the electronics, feedback loops, sensors, 100,000 mile spark plugs, and so on, today’s tune-up consists of little more an oil change. But it puts general repairs out of the question for the backyard mechanic and takes away the simple joy and sense of satisfaction one gets from maintaining one’s own vehicle.
Perhaps that’s another reason (as if I needed one) I so enjoy owning motorcycles. While it’s true that getting home with some cigarette package foil wrapped around a blown fuse (which I have done in the past – smoking could truly be considered a life saver in those days) is not an option with a modern bike, any decent wrencher with a good shop manual and a few special tools can still do most of their own work. 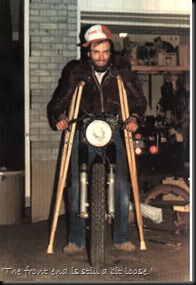 Which may become a moot point as now we're hearing from Europe that the European Commission is considering anti-tampering laws that would prevent modifications to engines and exhaust systems (as a minimum) and in the extreme could prevent unlicensed mechanics (you and I) from working on their own motorcycles. Stupid politicians (Is that a redundancy?) aren’t restricted to Europe, so needless to say if the anti-motorcyclist faction over there is successful implementing these initiatives, US and Canadian lawmakers won’t be far behind.
As Dylan said, “The times they are a-changin’”. And not always for the better in my opinion. All I can say is that I'm thankful that I at least had the opportunity and skills to do those things because I expect I’m a member of a dying breed, possibly the last generation to be able to do so.
It’s sad really.