On Two Wheels in Spain

Just got back from a fairly long trip which included a few days in Barcelona, Spain. While 4 days isn’t enough time to get to “know” a city, my first impressions are that Barcelona could easily become one of my favourite places to visit. How can you not like a city that celebrates graffiti as being part of its art scene (and some of it is very good indeed), that brought the world Antoni Gaudi  and his magical Park Guell and piece de resistance, the Sagrada Familia, started in 1882 and expected to be completed in 2026 (although some claim 2050 is more likely), a city where ancient Roman walls blend seamlessly into modern shopping districts, and a city that has so totally embraced 2-wheeled travel? 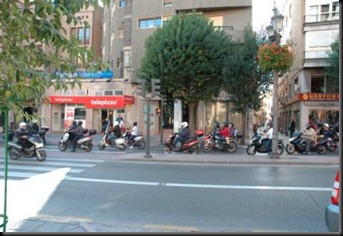 While I didn’t have the opportunity to experience two-wheeled travel first-hand on this trip, it would be impossible not to remark on how the scooter is such a integral part of the culture. Whether it’s the young lady in a skirt and high heels commuting to work or the older fellow out doing some shopping in the market, the scooter is a major method of transportation for many city residents and the full-face helmet a popular fashion accessory. 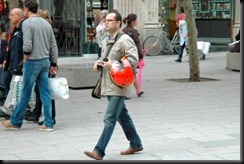 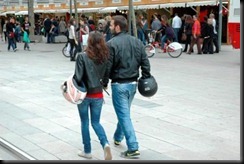 Lane splitting is common at traffic lights where car and bus drivers leave a little room up front for the scooters to move to the head of the line and be the first off the mark when the light changes. Parking appears to be wherever there is space, however riders are careful not to block the sidewalks but position their bikes in such a way that pedestrian traffic is unimpeded. Overall there appears to be a sense of accommodation that is sorely lacking here in North America. I guess it’s partly the car culture we have here and the sense of entitlement that seems to come with 4 wheels and a roof. It’s also likely related to the economics of owning and operating a car versus the cost of scootering. Or it could just be that drivers realise that it could very well be their own wife/son/daughter/neighbour on those two wheels in front of them. But whatever the reason it was very refreshing to see. 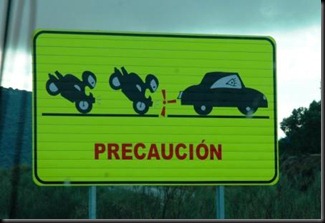