Well it’s been a helluva week!

The week started out normally enough. I was playing golf with some friends a few miles east of here when we were called off the course due to electrical storms in the area. So not wanting to waste a perfectly good afternoon we headed over to the Ashton Brew Pub (their Harvest Brown is delicious!) for a pint or two. Then the storm hit – golf-ball sized hail and winds that shook the old mill building.
After an hour or so it subsided enough to get in the car and head home, to be met by a roadblock set up by the police, blocking the only access into our community. With power lines and trees down all over the road, no one was getting in (or out) for the next 3 hours. Reports were of major storm damage and possible tornado activity (very rare in these parts). Of course we were worried.

When we finally did get through, here’s what greeted us as we came up our roadway. 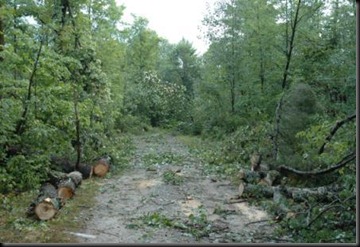 The fire department had been in and cut a path down our road as they were checking residents. 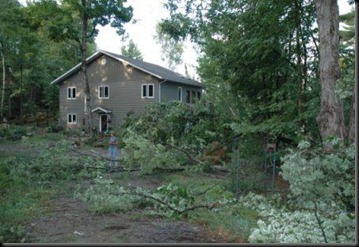 Under all those trees on the right is where we normally park our cars. 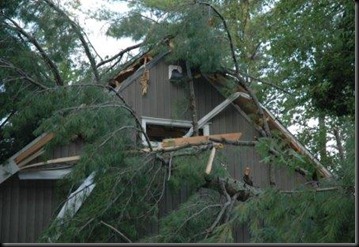 Garage took some abuse, but bikes and tools inside are all okay, although a bit wet from the rain coming in through the roof. 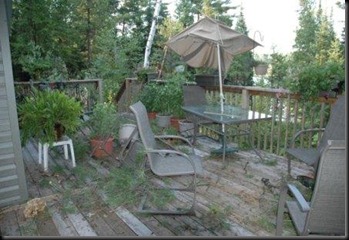 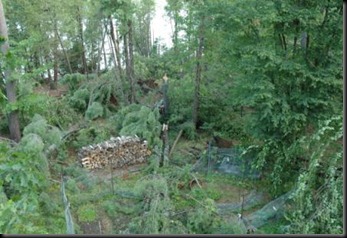 Buried under those trees is what was our vegetable garden. So far I’ve salvaged 6 beans and 2 cucumbers. We might yet get a couple of hardy tomatoes.

Fortunately damage to the house was limited to a broken window and some siding damage, but the garage didn’t fare so well with 2 trees on (and in) it. The bikes were okay though. (Whew!)

The next day, about 1/2 hour into what promises to be a months-long clean-up  I managed to do something stupid and fell, about 6 feet, landing on my back on a log. An ambulance trip into town followed (a first for me) along with a day spent in emergency while they determined that the only(!) problem I had was that I had broken 5 ribs (another first). 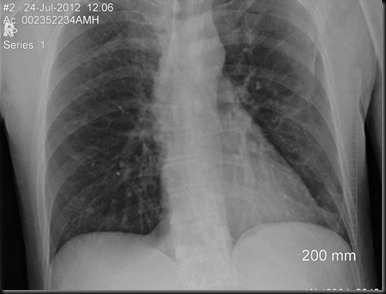 I know, I can’t make any sense of these things either, but I am assured that there are 5 fractures in there somewhere.

So now I’m sitting here listening to the generator going (probably won’t have power back on before the weekend), using my cell phone for internet access (even longer before we get wireless back), looking at a minimum of 3 to 4 weeks before I can ride again, at least a month before I can golf again, and having to pay someone else to clean up the mess because I did something dumb.
And to top it all off, the insurance company is giving me grief over some of the claim.
Can we please go back to Monday and start over?

P.S. The storm hit hard over a very large area and many homes and outbuildings were totally destroyed. And even though it had all the makings of a true disaster there was no loss of life, and no injuries reported. So while I chew pain killers by the handful and look out over a sea of destruction I have to think of how much worse it could have been and how truly lucky all of us were.