Going out his way.

Bill Standley was an avid motorcyclist all his life and his prized possession was a 1967 Harley Davidson. So when he died at the age of 82 he wanted to be buried with his bike. Not that unusual in itself, but Bill wanted to do it differently. Instead of being buried beside his bike, he wanted to be buried on his bike.
So with the assistance of a supportive family, an agreeable and creative funeral director, a glass-sided case, a modified septic tank, and 3 burial plots he got his wish, as per this news item: http://www.dispatch.com/content/stories/local/2014/01/31/buried-on-motorcycle.html
There’s something to be said for going out the way you always wanted, but still, seeing him sitting there on display in his glass box, astride his bike, is very discomfiting. But then my feelings don’t really count – the family is happy as, presumably, is Bill’s spirit, so who cares what anyone else thinks. And in the end it doesn’t really matter anyway as eventually Bill and his beloved Harley will revert to the dust from whence they came.
RIP Bill Standley and happy riding! 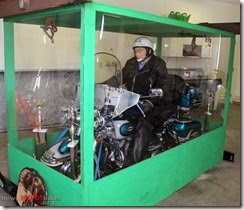