In search of the Methuselah battery

We just (barely) survived a recent deep freeze here, and are about to enter another one on Monday. When the temperatures outdoors are hovering around the –20C to –30C (-4F to –22F) we’re not the only ones to feel the cold. My car, which had always started, even in the coldest days of previous winters, didn’t like it one bit. Or, I should say, the battery didn’t like it one bit. So there I was, stranded, until I put a bit of charge back into the battery.  The next day, the same thing. It was time to replace the battery which I found, to my surprise, to be the original equipment and 7 years old.
Most sources I checked indicated that the average life expectancy of a lead-acid starter battery was 3 to 4 years, and given the temperature extremes here that lifetime would typically be even less. Even under more nearly optimum conditions I have never had a motorcycle battery last that long, with 5 years being about the maximum, even for a well-maintained unit.
While not the much-desired Methuselah battery that will live forever, clearly my battery didn’t owe me anything.
When I started looking for a replacement I kept seeing references to new battery technologies. In addition to the classic lead-acid battery that’s been around for a century or more, some manufacturers were touting their Absorbed Glass Mat (AGM) and Gell-Cell technologies (at higher prices, of course). So to sort out the confusion I went to an excellent source I have used before who seem to know everything there is to know about batteries and can explain it in layman’s terms – the people over at Battery Stuff. (Also a great source for replacement motorcycle batteries and accessories.)
There’s some really good information in their on-site tutorials, but to summarize, all three types employ the same general principles, but AGM and Gell-Cell batteries both have the advantage of a reduction in the rate of sulfation – which is what kills your battery over time – and so should last longer. Between the two, AGM is more suitable for starter-type applications and Gell-Cell for deep cycle applications. AGM batteries will also hold their charge longer than a typical flooded lead-acid battery, so forgetting to hook up the trickle charger when you’re going to be out of town for a few weeks is much less likely to leave you stranded with a dead battery when you return.
All of which is to say that the battery on my Dyna is nearing its end of life. It still seems to hold its charge, and I do keep it on a charger, but my next battery will definitely be an AGM type. 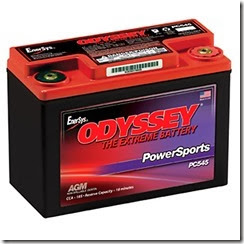