“I have too much money.”

That must have been the thought of the person (who shall remain anonymous) who just spent $1.35 MILLION to own this bike: 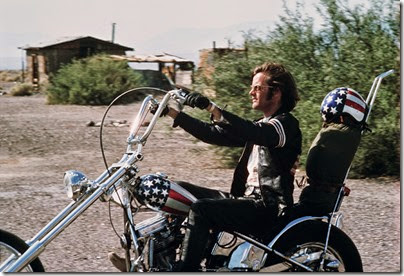 I know, I know, collectors will pay insane amounts for one-offs or vehicles with well documented histories, but this bike is different.

First of all it’s not the only copy floating around that purports to be THE bike that Fonda rode in Easy Rider. Rumours abound but apparently 2 were built for the movie. One was crashed at the end of the film and the other was stolen, along with both Dennis Hopper bikes – or so the story goes. This particular unit that was just sold is supposed to be the crashed bike, restored by Dan Haggerty of Grizzly Adams fame. But then so is a second bike, owned by Texan Gordon Granger and also authenticated by Haggerty. Clearly one is a replica, but which one?

Even Fonda doesn't know what’s going on, being quoted as saying "There's a big rat stinking someplace in this."

So, $1.35 million for a bike with dubious credentials. Good deal or insanity?

I know which term I’d use (even if I had a ridiculous amount of money to throw away on toys – sorry, investments).