The day the rally came to town

We live next to a 10 kilometer stretch of dirt laughingly called California Road. Clearly it’s nowhere near California, nor is it anywhere near being what one would consider to be a road. It is sort of maintained during the summer months by fixing the washouts caused by the spring runoff and beaver dams. The township will sometimes run a grader along it, and every few years there might be a load or two of gravel dumped on it to fill the larger potholes and gullies. But that’s it. The sign says “Drive at your own risk” when it should more precisely say “Abandon hope all ye who enter here”.

All of which made it a perfect venue for one leg of this year’s Lanark Highlands Forest Rally. Sponsored by the Motorsport Club of Ottawa this is the 9th running of this particular rally, and the first year that California Road has been one of the sections. So, of course, we had to walk over and check it out.

We didn’t get there early enough to walk out to what should have been a couple of great vantage points, but that’s probably just as well as we would have been stuck there until they were finished with the section (about 4 hours). And since it was 0 degrees and windy with on and off blizzard conditions (Yes, this was today – May 7!) we would have frozen.

But a little cross-country hike through the woods did get us to a spot not too far from the start where we saw a bit of the action. 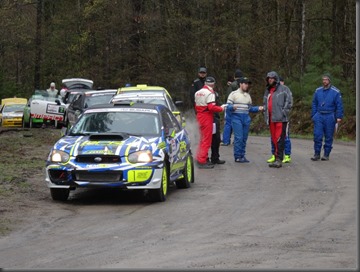 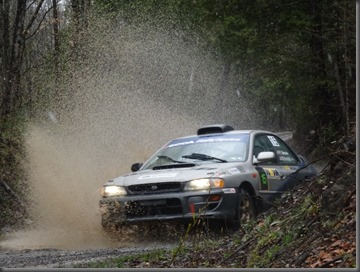 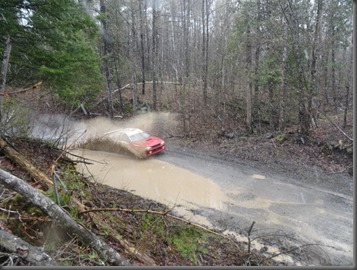