A while ago I saw this image on line. My first thought was, “Hey, that guy’s wearing my shop jeans!”. Those would be the ones the missus won’t allow me to wear into town, and only grudgingly allows me to wear in the shop. My philosophy is, with a pair of jeans like that who cares how often they get washed. Right? It’s all about saving the environment – fewer washes, less electricity used, less detergents going into the groundwater. And, probably most important, less effort on my part. 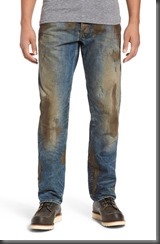 Anyway… It turns out that no one actually absconded with my grubbies because this was an ad for Nordstrom’s Barracuda Straight-Legged Jeans. According to the ad copy, these jeans “embody rugged, Americana workwear that's seen some hard-working action with a crackled, caked-on muddy coating that shows you're not afraid to get down and dirty.”

Except you are afraid to get down and dirty, else you wouldn’t have to pay $400 for a pair of jeans. And if you did actually get down and dirty your $50 a pair jeans would look just like this in a couple of hours.

Nope. If you buy and wear these (and many have as Nordstrom’s is apparently “sold out” of them) you’re a poser, a wannabe, someone who is probably still living in your Mom’s basement.  Which, now that I think about it, is the only good reason to fork over that kind of cash – to convince your Mom that you really are going to work every day and not to the local Starbuck’s where you sit and play with your laptop all day while nursing a grande frappacino latte with soy milk, comparing ruggedness quotients with tattooed baristas.