According to the this news item an Ontario legislator has tabled a bill, dubbed the “zombie law”, that would make crossing the street while looking at your cell phone illegal, with scofflaws being fined $50 and up depending on the number of times they have been caught in flagrant disregard of yet another Nanny-state incursion into the realm of legislating stupid. 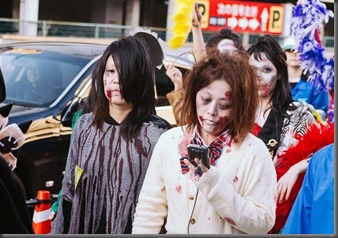 This province is certainly not alone in this regard but few jurisdictions seem to have the same degree of enthusiasm for protecting us from ourselves as Ontario does. Liquor laws are still firmly set in the immediate post-prohibition years where it was felt the population could not possibly control their thirst (pun intended) for the demon rum. Several years ago an attempt was made to limit motorcycle passengers to 14 years of age and older for “safety” reasons. (Blogged about here. Fortunately the bill did not become law but it was a close thing. ) Periodically legislation is floated (so far only as a trial balloon) that would see already legally-required helmeted bicyclists subject to training, testing, licensing, and insurance, again for “safety” reasons. And recently an intoxicated canoeist was charged with “impaired driving” which is a criminal offense and which could result in the loss of driving privileges if he was found guilty.

The one thing these laws, and countless others just like them, have in common is that they are all attempts to stop a few idiots from doing stupid things. Except that the broad legislative brush treats everyone the same as the idiots, whether they are guilty or not.

So here’s an idea. Scrap all these individual laws and replace them with a common sense law, something along the lines of “If you do something stupid you’re on your own, pal. And if society has to pay to rescue, resuscitate, rehabilitate, or, if all else fails, inter you, you’ll be getting a bill.”

In other words, let Darwin do his work unencumbered while making sure the taxpayer isn’t on the hook. Much cleaner, and we improve the gene pool as well.