On balance, I’d rather have 2 wheels.

Someone recently sent me this picture of an MV Agusta 60cc  Monomoto Superleggera, reportedly built for the little-known sport of Italian monocycle racing in the 1950’s. So I did a bit of research to get the story behind this creation. 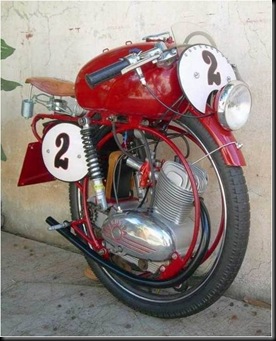 Unsurprisingly, there are two stories. The “official” story is this:
“This MV Augusta 60cc Monomoto Superleggera is the experimental machine ridden by a wealthy young Italian by the name of Luiggi Bandini. During practice for the 1954 Milano-Taranto road race, Bandini tragically lost control in a misty mountain section while waving to a pretty spectator. His grief-stricken father, Count Enzio Bandini (also known as “The Falcon”), never again permitted anyone to ride or even view this advanced design. Knowledge of its whereabouts faded. Eventually, rumors of this fascinating machine reached the motorcycling bon vivant Todd Fell. On a trip to Naples, his quest to find it was rewarded at the Bandini country villa, where in 2004, fifty years after the tragic accident, the late Count’s family was persuaded to part with the treasure."
Second story:
The bike was recently built in Mexico out of spare parts and was never intended to be ridden.
I’d like to believe the first story as it has a certain class that just isn’t present with a junk-yard build, no matter how pretty the outcome. But, sadly, I expect the latter story is closer to the truth as the bike predates all the necessary electronics needed to maintain balance a la Segway when starting, stopping, etc. Also the inevitable oil leak from an old Italian engine would spell certain disaster.
But regardless whether it is actually rideable or not, someone thought enough of it to pay $17,500 for this objet d’art at a Daytona auction in 2007.