DUI on a motorized bar stool

Although this story involves four wheels and not two, it’s too good to pass up. Apparently this guy was too drunk to walk after consuming “at least” 15 beers at the local tavern, so instead decided to ride home on his motorized bar stool. Or maybe not, as he’s now saying that his head hurt so much after the crash that he went home and drank 1/2 a bottle of whisky before the cops showed up.
Regardless of his state of intoxication, he crashed en route while trying to make a turn at about 20 mph, injuring himself and triggering a 911 call.
Kile Wygle was charged with DUI and driving with a suspended license. The barstool was towed away and is now apparently in hiding. 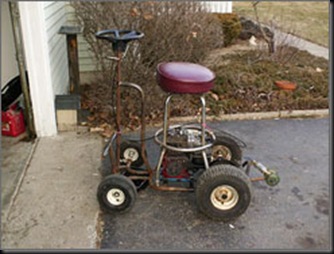