A 44-year-old motorcyclist died as a result of an Ottawa hit and run accident in the pre-dawn hours this morning. The driver of the car did not stop, and the police are now searching for what they believe is a gold or tan Buick Regal or Century.
Okay, accidents happen, and we don’t yet know the details as to what actually transpired and who was at fault. But when the person that hit him left the scene, he or she was leaving a dying person on the ground, a person whose life may have been saved had someone offered immediate assistance and called an ambulance right away. According to some reports a pedestrian found the rider some time after the accident, lying about 20 feet from his crumpled bike.
When that driver ran, this escalated from a hit and run to murder, in my opinion. I hope they get the sonofabitch responsible and he pays for a long, long time. 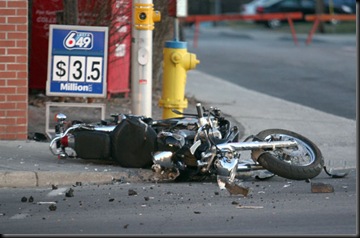 (Photograph by: Pat McGrath, The Ottawa Citizen)
How can anyone just leave a person to die?
UPDATE APRIL 17.
A 56-year old male has turned himself into police.
“Gordon Davis is charged with failing to stop at an accident causing death. The investigation is ongoing and further charges are possible.”
Let’s hope so!
UPDATE MAY 16.
According to the Ottawa Citizen today, the driver, Gordon Davis, has now also been charged with “owning and operating a motor vehicle without insurance, driving a motor vehicle without a license, and making an unsafe turn.”
His next court date is June 12. Stay tuned.