Dumbed down by technology

The progression of technology in all things motorcycling has been pretty amazing and generally beneficial. We can ride harder than ever, stop faster than ever, be more comfortable than ever, and go longer distances without breakdown and/or major maintenance than ever. And while I know lots of folks with vintage iron (I’ve been known to lust after a few specimens myself) those bikes are usually ridden with a lot of care and a healthy respect for their limitations compared to today’s models.
But at what point does all this technology just end up dumbing down the riding population?
One example. A relative of mine who shall remain nameless to protect the guilty (but who’s first name starts with Bob) rides a fuel-injected Road King. Last year while on a trip to Australia he rented a Heritage Softail in Melbourne to ride the Great Ocean Road (one of the best riding roads in the world in my opinion). The rental agency advised him that the fuel gauge was broken, so he’d better keep an eye on distances between fill-ups. However that does no good if there aren’t gas stations every few miles – which is the case in Australia. Gas stations can be few and far between and so Bob found himself in the unfortunate position of having run out of gas in the hinterlands of Victoria, somewhere northwest of Melbourne. “Damn” he said, or words to that effect.
The first farmhouse he walked to didn’t have any gas, but the person who answered the door allowed as how the next farm over usually had some on hand. So a bit further along the road he knocked on another door to be greeted by an older gent who said his son was out, but he might be able to find some gas. Off he went into the barn and returned with a battered old coffee can full of brownish stuff that smelled vaguely like gasoline. So Bob headed back to the bike with his open pail of gas, dumped it in the tank, fired it up, and rode off hoping he had enough to get to the next filling station - and that whatever was in the can wouldn’t blow anything up in the meantime. 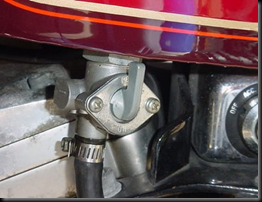 Sure enough a few miles later he found a gas station. And from then on made it a habit to fill up every chance he got.
When he got back to Melbourne a few days later he was asked about his trip. He casually mentioned running out of gas and having to go begging the locals for anything combustible. The young lad looked at him and said, “Why didn’t you just switch to reserve?”
Now back in the 70s, we knew that!