The last of the snow and ice on our road finally succumbed to the week of sunshine and record-breaking temperatures yesterday. So that meant today was… Ride Day!

The weather held at about 45 degrees and partly sunny so there was no question 2010’s inaugural ride was going to take place as long as I could get away from the desk for a couple of hours. Fortunately it was a quiet afternoon so I hung up the “Gone Riding” shingle and off I went. 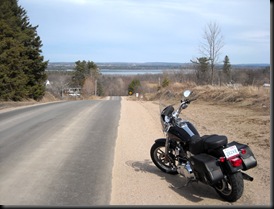 With lots of snow in the ditches and the fields and trees bare of any hint of green, the landscape was still quite desolate. But the critters were up and about with skunks making their presence felt (smelt?) along with deer, raccoons, and the ubiquitous groundhog. Traffic was light as I explored the countryside, just randomly taking turns down side roads, some of which I’d never been on before. And except for some drama with winter sand that was still spread across the roadway in places (usually in a corner or at an intersection) it was a great ride.

Soon enough two hours and the better part of a tank of gas had gone, so it was time to figure out where I was and head home. A couple more turns and I was back on familiar ground with just a few miles back to the barn.

Now, like the first ride every year, muscles unused for the past 5 months are rebelling, letting me know that having a heavy full-face helmet atop my neck is not normal and that sitting with arms and legs outstretched is really an unusual position to hold for 2 hours.  But that all goes away after the first couple of rides as muscle memory returns and riding skills and confidence improve, allowing for a more relaxed and enjoyable ride next time. Which may not be for a week or so as they are forecasting rain and snow for the next few days.

But that’s okay. I’ve now had my first ride (8 days earlier than last year!) and I can use the time to try and get the other two bikes roadworthy before the riding season begins in earnest.