Have Harley, will golf

As I’m sure most of my readers are aware by now, my two favourite summer pastimes are riding and golf.
Unfortunately I’ve never been able to combine the two for the simple reason that carrying a set of clubs on your bike is not an easy proposition. Until now that is. 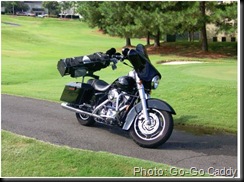 Go-Go Caddy have entered the market with a golf club carrier designed for Harley-Davidson motorcycles. According to their web site, “Go-Go Caddy, the easy-on, attractive and rugged golf club carrier, makes use of the same mounts used for a detachable backrest which already exist on the bike.”
Priced at $499, the Go-Go Caddy is available in any colour you want, as long as it’s black.
While it’s an interesting concept I’m still having some difficulty reconciling the image of a tattooed guy in plus-fours tooling down the highway on his loud-pipes-save-lives Fatboy emblazoned with flames and airbrushed skulls while leaving a trail of errant golf balls and tees behind him because he forgot to zip up a  pocket or two. Besides it just looks wrong.