I’ve always admired the Norton brand – even owned a few in my time – and have long lusted after a 60’s vintage BSA Lightning or Triumph Bonneville. There’s just something about those Brit bikes of that era that appeals to me.  Certainly they don’t hold a candle to even the poorest handling and most maintenance intensive bikes of today, but they have a character that is hard to describe. It’s as if the expression, “if I have to explain it you wouldn’t understand”, was coined specifically in response to the love of Brit bikes of the 50’s and 60’s.
Anyone who followed the British bike scene back then is aware that a popular past time was to marry Triumph engines and Norton frames (Tritons), or Triumph engines with BSA frames (Tribsas), or BSA engines with Norton frames (Norbsa), and so on. These hybrids were so common that after-market engine mounts and other bits were available for the DIY guy to make the job pretty much a weekend’s undertaking. And then of course the tuning would begin so you’d have the baddest Triton parked in front of the Ace Cafe.
But until now I’d not seen a Brit/Metric hybrid. 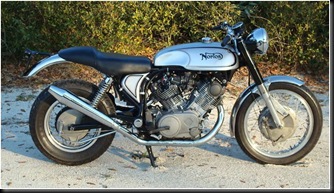 This amazing example of the hybriders (new word) art currently resides in Florida and is listed for sale on ebay. According to the write-up, “The Banquer 920 is a Norton featherbed frame, Norton front end and Norton cosmetics with a Yamaha Virago engine and drive shaft. This combination gives you the best of both worlds because you get the great looks of a classic 50 year old Norton with the reliability, performance, and ease-of-maintenance of the Yamaha engine/drive shaft.” I just think it looks awesome, and I expect, sounds that way too with the 2-into-1 and the upswept reverse megaphone exhaust (very Norton’ish).
All of which is to say I was checking the bank balance when the missus, as perceptive as ever, walked into the office, peered over my shoulder, and said that one magic word that sends all of us back to dreaming.
Maybe I’ll just print an 8 by 10 colour glossy and hang it on the wall instead.