Some time ago a Member of the Legislative Assembly of Ontario, Helena Jaczek, tabled a private member’s bill, Bill 117, that would have removed a motorcyclist’s right to carry a passenger under the age of 14. To say that the bill was based on dubious statistics would be overly generous. In fact it was based on misleading statistics and factual inaccuracies – of which the bill’s sponsor was fully aware. And both she and the government itself heard about it loud and clear.
(For those unfamiliar with provincial governance, a private member’s bill is a bill tabled in the Legislature by a member of the Legislature, but is not necessarily endorsed by the government of the day. As such, and without the full support of the government, they are rarely enacted into law. However in this case, Bill 117 seemed to have a lot of support across both parties, and actually got to committee, where it was on the agenda for consideration.)
Now here’s the good news. I just had it confirmed today that with the prorogation of the Legislature to start a new session in March, Bill 117 died on the order paper. It’s now history. If Jaczek or anyone else wants to re-introduce the bill or a variant of it, they need to start from scratch – unlikely given the heat members from both parties received over this one.
So kudos to one and all who took the time to make their views heard on this nanny-state initiative. You all helped to ensure that biking families are still welcome in Ontario. 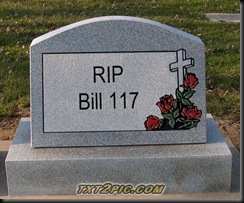 If you’re interested in the background, there’s more here, including links to other sites for discussion on this issue: